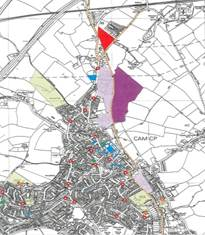 Our client was seeking to build 71 homes on 7 acre site to the north of Cam, Gloucestershire, a large working village near the Severn estuary.

The site lay outside the defined settlement boundary of Cam, and Stroud District Council claimed that it already had a 5-year supply of housing land.

In his ruling, the Planning Inspector agreed that the proposal would cause ‘limited harm to the character and appearance of the area’, was ‘broadly compatible with the…aim of locating development in sustainable locations’, and that Stroud District Council was ‘unable to demonstrate a 5 year supply of housing land’.